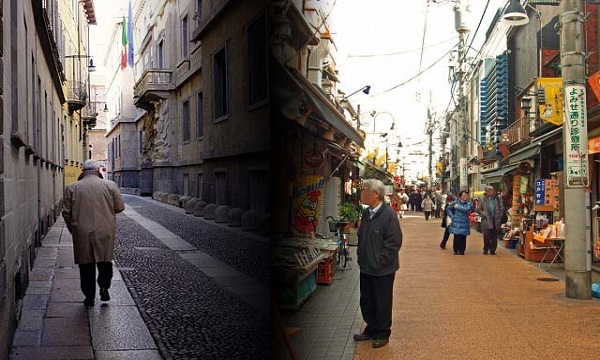 ◆ Marco Crepaldi
A young socio-psychologist in Milan, Italy. Founded the web site “Hikikomori Italia” to respond to the increase of hikikomori in Italy, presiding liaison meetings of about 170 families. Refer to his article “What hikikomori is and what Isn’t” which was translated also in Japanese and raised big reactions.

◆ Vosot Ikeida
A middle-aged hikikomori in Tokyo, Japan. Has been a hikikomori intermittently for over 30 years. Refer to his career “Hikikomori Horoki (Odyssey of Hikikomori)“(Japanese). Founded “VOSOT Project”. What he speaks out here is his personal opinion and nothing to represent the Hikikomori News.

Marco Crepaldi:
I have been studying the hikikomori phenomenon in Italy since 2014 as a social psychologist. I founded a blog called “Hikikomori Italia” where we talk about this phenomenon, which started from Japan. But nowadays we talk a lot about it in Italy too. I would like to sensitize the public opinion for those who don’t know about the syndrome yet.

Vosot Ikeida:
In Japan, I am so-called “aged hikikomori”, in my 50s, and have been a hikikomori, on and off, for over 30 years.
Is there any hikikomori in Italy?

Marco:
Oh, yes. I am running a network for about 170 families that have hikikomori child in. But in Italy, we are just at the very beginning, so our hikikomori are all teenagers or young adults.

Vosot :
I am afraid I wonder it, because I knew one Italian hikikomori who was as old as I was, about 30 years ago.

In those days, the word “hikikomori” had not existed yet even in Japan. That is why people tend to think “there was not even a single hikikomori in those days”, but that’s not true.
Hikikomori did exist even 30 years ago, but the thing is just that hikikomori had not been named so yet.

So you may have aged hikikomoris also in Italy, who are not yet identified or discovered.

Marco:
How did you meet the Italian hikikomori 30 years ago, though you didn’t call it so yet?

Vosot:
I started to do hikikomori at my age of 23, just when I was about to graduate from university and work for a company. But it didn’t look nice to be a hikikomori in your domestic society. Also, you are likely to get criticized or blamed by the people around you. So in my case, I escaped from Japan and continued to be a hikikomori overseas.

Marco:
Did you know what you were doing just like you explain me now?

Vosot:
You’re smart. No, I didn’t. It is only now I can explain so clearly like this. Over time, trivial details are abstracted, and the essence of actions has been revealed.

Marco:
Now, what happened on you overseas?

Vosot:
Then, I met an Italian guy, namely Giuseppe, in an African city.
We told each other about why we were there, and I found him being exactly the same as I was.

Marco:
He was an overseas hikikomori, you mean?

Vosot:
That’s right.
After he had gone back to Italy, I have visited him once in his home town.

It was such a good experience for me to see his daily life. His family had the similar structural disease as my family had. One of his local friends was shutting himself in his room and doing nothing but reading books every day, and his parents were blaming him.

Marco:
If it’s today, he would be called a hikikomori.

Vosot:
Exactly. One important thing is that, we didn’t have the internet in this world yet, so we had no chance to be addicted to it either.

Have you been a hikikomori by yourself?

Vosot:
I have to say, the way to be a hikikomori in is so various even only inside Japan.
Some of them are starving for communication, but others are avoiding from it. One of my hikikomori fellows has never spoken even single word for as long as 5 years. On the other hand, while I was a sotokomori which means “overseas hikikomori” in my 20’s, the least communication was inevitable to survive in every city I stayed as a hikikomori. I was communicating with others most of the times very reluctantly.

I imagine many hikikomoris have the same or similar inner problems for communication. They may want to communicate in the very deep side of mind, but they can’t easily find how to find the proper words to express themselves, and to settle their mind, thought, desire, pride and so on.

What else are you doing for hikikomoris in Italy?

Vosot:
I can see you are doing a great job.
In Japan, we have the similar kind of organization, which was originally started from a network for families of hikikomori.
It is only recent a few years that we hikikomori ourselves started to have our own network, not for parents. Our Hikikomori News has taken a big role for it.

…to be continued to Round 2

to the Japanese version of Round 1